Of Death And A Banana Skin 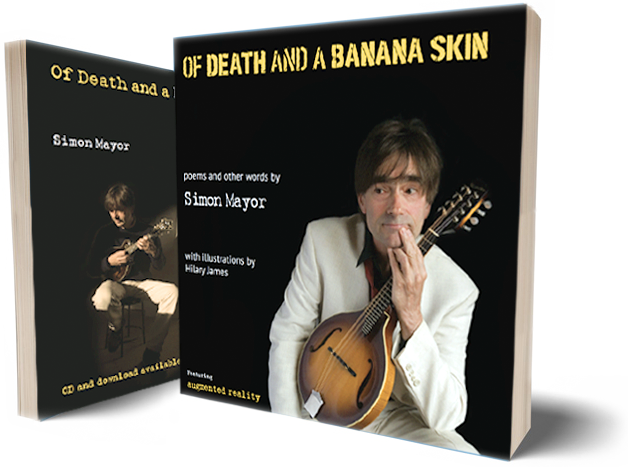 ‘Uplifting… Made me laugh a lot… philosophy thrown in as well…
magic… this is the start of something big…’
Sean Rafferty, BBC Radio 3

It was Hilary James who first persuaded me to read a poem during a concert. I chose The Stick, and people seemed to like it. For years we had performed together on stage, she singing (mostly), me playing (mostly), but we both did both. This was usually as a duo, but also with our mandolin quartet The Mandolinquents and in other occasional configurations.

Perhaps I’ll be more specific about my poems and her means of persuasion. She got me in an armlock, twisted it violently up my back before threatening to push it that extra inch to tear the tendons, thus preventing me from playing the mandolin ever again. SAS training is so rigorous it becomes instinctive.

The thought of not playing the mandolin was unthinkable, but after thinking about it, I thought it best to succumb, and just a few years later we published Of Death And A Banana Skin.

Show more
Show less
Please explore this website to read and hear some of the poems, see some double page spreads, and watch animated renderings of Hilary James’ digital artwork.

And if you’d like to Buy The Book, I would of course be delighted!
Just click the image and you’ll be taken to the Acoustics Shop where you can order one.

Video feature – ‘The Man On The Plane’

Sharing a tale with a live audience about a flight in the USA.